From the 29th of may to the 1th of june 2008, in the Macello IV of the Mattatoio (Slaughterhouse) of Testaccio in Rome, there will be thefifth edition of LPM – Live Performers Meeting, International Meeting of live video performers, visual artists and vjs, devoted to live video performance.

With more content and participants than any previous edition, a new venue has been found, the very special Macello IV of the Mattatoio of Testaccio, an ex-slaughterhouse giving more than 900 sq.m and one of the hystorical pavilions built by Gioacchino Ersoch between the 1888 and the 1891.

LPM will again use its 4-day formula, this year building on interaction between the audience and the happenings on stage: this exchange between the actions of the spectators and the “represented” actions will generate a unique event. And of course, the program will be full of workshops and showcases of projects, softwares and brand new products.

LPM as a whole is focused on LIVE VIDEO ART AND PERFORMANCE, and for this edition we have developed four specific themes.

DIGITAL FREEDOMS
At the core of LPM is the ideology of free software for audio/video mixing. Thanks to the community of “FLxER” and the Linux Club in Rome, LPM has been able to flourish and give back to worldwide community of live video performers. This year there will be a whole day dedicated to the realities of live video connected with the concept of digital freedom. Not just Free softwares, Free hardwares, Open contents, Open sources, Hacking, among the protagonists of workshops, showcases, performances and vjsets, but even DegradArte: workshops, vj sets and live performances “degraded”, produced by Degradarte Novalab and ArtisOpenSource. These artists are inspired by the new current of scientific, tecnologic and aesthetic research , dedicated to the study of the “legally degraded artwork”.

8 BIT + ELETTROPOP
A whole audio-visual culture surrounds the 8bit scene; the video performers interested in these most particular sounds and aesthetics will perform with 8-bit – and electropop-muiscians. With beats are generated by nintendo sounds, by samplers or by synthetizers and toys, human voices are effected with vocoders or with various strange filters, we shall see what comes out of the mix. It certainly should be amusing for audience and participants alike.

BREAKBEAT + TECHNO + ELECTRO
Video performances and vj sets are typically found flowing with the intense sounds and the relentless beats of electronic club music. And you’ll find that here too, imagery following and interpreting the rythmn of the freshest Breakbeat and Drum n’bass, and from 2am to 4am going with the pulsating Techno and Electro sounds.

VISUAL GENDERS
A full day of Queer independent culture with the QUEER JUBILEE preview by the Phag Off Collective. This festival within the LPM is a manifestation of a project which is working on a national and international level to experiment with the language of representation in terms of gender politics and sexual orientations with the aim of deconstructing stereotypes and ideological power relationships.

There will be background videos and music for dinner, and after dinner dedicated AV performances and vjsets. As usual, at the end of the evening, open time for VJs will take place: vjs can perform freely, taking advantage of the available video consoles, projectors and monitors.

LPM 2008 maintains the spirit of a meeting, which has been its main characteristic since the first edition. It is conceived to be a place for comparison and exchange of information and ideas between vjs, visual artists, live-video performers and interested people. Experimentation is one of the founding elements of its ideology. LPM is a non-profit organisation where any gained funds are invested back to support the research and development of the live visual field.

Similarity of ideals and common roots has prompted the LPM to become member of the Avit network, whose aim is to improve and promote the culture of veejaying events worldwide. After the first festivals in England, the Avit network expanded worldwide, establishing collaborations as in C23 in Germany (AVIT Berlin) and Vision’r in France (AVIT France) and LPM in Italy. This partnership of “network” and “meeting” is possible thanks to the common cultural background and the strong affinity of spirit and purposes.

LPM is not a festival, it is an opportunity of meeting and of making yourself an idea of what visual-artists are creating or better, what they could create. Therefore, and in order to allow the many interesting artists to perform, the maximum length of a performance is 30 minutes.

The subscription to join LPM is FREE and is open now until the 30th of April, 2008. For details on how to subscribe, see the “participate” section of the website.

LPM is produced and organized by Flyer Communication (flyer.it), Linux Club (linux-club.org), FLxER.net (FLxER.net) and FLV – Flyer Live Visuals, with thanks to the cooperation of important international partners. 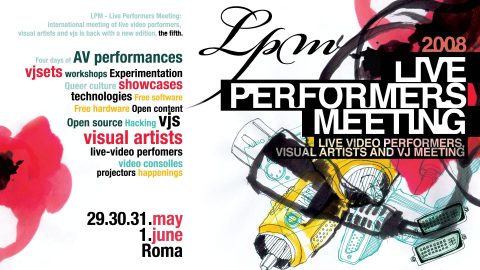