The tenth edition of LPM – Live Performers Meeting – kicks off on 22nd September 2011 in Minsk, Belarus.

Y gallery will host permanently the installations. In the morning hosts some of the most challenging workshops and performances in the afternoon and evening party.

MALAKO BAR is the heart of LPM Minsk, gathering all the participants of meetings, it hosts small presentations and performances as well to join the Exhibition Area for evening parties.

And LEARNING SHOP LogvinaY will be transformed to host workshops.

Loft Cafe is a large space filled with projectors and a home to the most demanding LPM Minsk performances, with the usual VJ Clash during the night party on Friday and Saturday.

LPM maintain the 4-days formula, but this time different fields of artistic research will be presented heterogeneously; hundreds performance and artworks investigating specific themes will be performed and exhibited each day without the constrain of one only daily topic. This way we hope to offer an insightful and surprising program, highlighting diverse artistic practices every day while fostering the sharing of knowledge by means of workshops, presentations and panel discussions.

The everyday schedule of the event:

Installations and exhibition stands will be active throughout the venue every day and quiet spaces for discussion and exchange will be available during the whole event.

LIVE VIDEO is the main focus of LPM; in 2011 we aim at investigating and presenting some specific aspects of live video practice which we believe play an important role in the present cultural process.

Generative art is an expressive and increasingly explored genre, particularly thanks to the last decade’s technological novelties. The vj became a programmer and the programmer mutated into a performer, capable of creating incredible digital biospheres; a new era of sound and codes have produced novel organic visual experiences. From computer to physical and portable devices, many tools are available to creators and designers which contribute to the technological and artistic development through generative audiovisual language. Thanks to an active and reactive coding of the world surrounding us, the audience can perceive a unique atmosphere, experiencing complex performances of simple bits and binary codes.

Since more and more time the language of video performance deals with the issues related to gender and sexual orientation, intersecting with gender studies, queer theory and contemporary art.

Both in the community L.g.b.t. and the Queer circuits the trajectories taken by such language range from Vjng to Performance Art and conferences and their ground lays in the representation of the body. The interest of LPM 2011 is: understand how the vision of the body can be decentralized, fractured and multiplied; how the theme of sexual identity is disconnected from its universalization heterocentric and stereotyping of LGBT, how the video language becomes an instrument of gender empowerment, which languages intersect with the video (music, spoken word, body art) and what is the role of an independent and libertarian pornography within this framework.

LPM calls to the video performance as a seduction strategy of organs and thoughts.

From the theater of shadows to the live soundtrack for the early movies, from video art to VJing, from performance to networked laptop performance, today on a stage virtually augmented scenery and bodies assault our perception, flood our eyes and our ears to narrate stories, memories and fragments of reality, or rather, what we believe reality is.

In this technological and social advance modalities of audiovisual expression have been extended, mixed, soiled. For this reason we believe that the term live cinema is no longer able to represent all the possibilities of visual and sonic creation and narration that coexist in the art scene today.

How do we define an authentic conception of a rich audiovisual experience in the light of the extreme futility of everyday perceptive experience? How can we re-encode the values and contents to expand the perceptual experience of the public?

This year the Digital Freedom Week @ LPM focuses on the domains of information.

Our lives, our forms of expression, the things we buy, our relationships and the things we learn, communicate and share are progressively (if not totally) changing into digital data that is transmitted over digital networks. Open access to data and information, and the possibility to determine how our information is shared and used are key factors to defend our freedoms and rights. Contemporary Visual cultures transform the fundamental role of data in our lives into new paradigms for aesthetics and interactivity, often poetically merging activism and beauty: database aesthetics, visuals produced using enormous sets of public/private data found on digital networks are only two of the forms of artistic expression that over time have produced wonderful sensorial experiences that have been able to both inform and activate the consciences of people worldwide.

This year DFW@LPM wishes to explore the themes of free access to data, information and knowledge: workshops, conferences and live performances will investigate on innovative and creative paths to promote freedoms-through-data.

Stereoscopic video in real-time is a relatively novel technique, it came to prominence in the film industry and now it is being applied to most diverse video contents, from Hollywood movies, to the games of the World Cup. Stereoscopy in particular is any technique capable of reproducing visual information in three dimensions or to create an illusion of depth in an image.

This technique can be applied to live video, with appropriate software and specific techniques of video processing the human visual perception can be manipulated to create deep visual spaces, augmented spaces, which are able to drag our vision beyond the bi-dimensional perspective of a screen.

The objective of LPM 2011 is to present innovative live video projects that leverage this kind of technology and experiment with new levels of expressiveness. The most interesting projects will have the fantastic opportunity to be performed in the 3D cinema hall of the recently renewed Cinema Aquila.

Graffitism, from its birth, takes place at the core of the artistic debate, for the cultural issues it raises as well as for its political stance.

The period stretching from the first tag on a wall or an a subway car in New York to the second wave in Europe – from the 70s and early 90s – already shows what can be defined a stylistic evolution. Particularly in the context of the initial spread of Graffitism, the competition among the players was named the Style War. Stylistic research in graffiti shifted from speed, accuracy and originality to the technological update of its means of expression, up to the actual point where a full-fledged “media drift” seems to have taken place. The spray was for a long time the preferred medium for the protagonists of this global phenomenon, but with the advent of technologies related to the projection, the Urban Art is not only able to avoid the creation of “dirty traces” and to overcome its space limitations, but as it can be shown, can open new paths for visual mixing, VJing and video art.

LPM this year introduces a new section to your schedule that is for all the experiments that link the principles of the urban digital technologies. Projectors, lasers, LEDs are the new “weapons” in the hands of those who act on urban spaces with the liberty and the resourcefulness of its glorious predecessors.

Video mapping is a video-projection technique that can turn almost any surface into a dynamic video display.

Using specialized software tools, the volumes are drawn and reproduced, in order to obtain projections that adhere as closely as possible to the selected areas; the final result transcends the ordinary knowledge of the video-projection, bound to the concept of screen.

In the field of mapping, the video-projection transcends ordinariness, fitting sometimes improbable surfaces, and livening volumes which lose their static stability and change themselves in pure visual flow. The effect is spectacular and exciting, the perception may be confused and misled from the illusionary deconstruction of what was previously static, and the mind is seduced by the images that engage in dialogue with the surfaces.

These large scale video-projections draw variously on location, history and context in their conceptual and aesthetic development.

The goal of LPM is to compile examples of impressive uses of video mapping techniques, various visual discourse onto buildings, within the urban nightscape.

VJ Torna is a Vjing contest which offers both live video practitioners and the general audience an inspiring and entertaining experience. The first Cinetrip VJ Torna was organised in 2004 in Budapest, Hungary with the aim of gathering and inspiring video artists from the local and international VJ scene.

The success of the event has been confirmed by the recent collaborations born worldwide: in the past twelve moths, VJ Torna went to Sao Paulo (Brasil), Budapest (Hungary) and Rome (Italy). In the next twelve it is planned to land in Barcelona (Spain), Lisbon (Portugal), Bogotá (Colombia), Sao Paulo (Brasil) again and hopefully in Mexico City (Mexico).

After fulfilling a super-sized compo in Rome, the year 2011 still hasn’t come to an end as we’ll step on land of Belarus in September to do our favourite thing in Minsk. We carry on with the fruitful co-operation between Live Performers Meeting and VJ Torna to evolve to something bigger. Again, we’ll be having fierce duels for three days between VJs coming from distant countries, and besides our part of the show, there’s the ever morphing, organically hiving italian live video meeting to give the frames.

There are 1 home-production and 2 live tournament categories you can choose to enter.
The jury is a sworn body of people convened to render an impartial judgement on the performance of each competitors. They are 3 to 5 industry professional and visual aesthetics masters originating both from the host country and from other parts of the world.

For more information about the concept and rules of VJ Torna, please visit our website at www.vjtorna.org

LPM 2010 maintains the spirit of a meeting, which has been its main characteristic since the first edition. It is conceived to be a place for comparison and exchange of information and ideas among vjs, visual artists, live-video performers and passionates. Experimentation is one of the founding elements of its philosophy. LPM is a non-profit organisation, any gained fund is invested in supporting the research and development of the live visual field.

Similarity of ideals and common roots has prompted LPM to join the Avit network, whose aim is to improve and promote the culture of veejaying events worldwide. After the earliest festivals in England, the Avit network expanded throughout the world, establishing collaborations as C23 in Germany (AVIT Berlin), Vision’r in France (AVIT France) and LPM in Italy. This partnership of “network” and “meeting” is possible thanks to a common cultural background and a strong affinity of spirit and purposes.

LPM is not a festival, it is an opportunity of meeting other artists and learn about diverse artistic practices, get new contacts, develop brand new collaborations. For this reason we provide several spaces for discussion and sharing and we limit the duration of each performance to 30 minutes.

The subscription to perform at LPM is FREE. For further details on how to subscribe, see the participate section of the website.

LPM is produced and organized by Flyer communication, with the support of the Culture Programme of the European Union.

The event is coorganized by Linux Club Italia (IT), FLxER.net (IT), Association Les Reseaux De la Creation –Vision’r (FR) and Jelenlét Kulturális Közhasznú Egyesület – Cinetrip VJ Torna (HU), in partnership withYgallery of contemporary art (BY), with the association of the Goethe Institut in Minsk (BY). 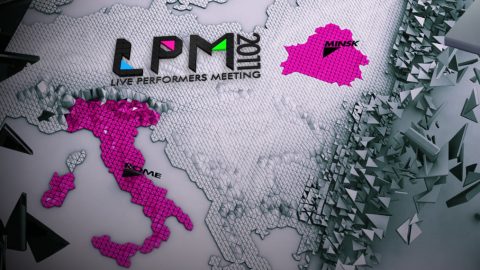