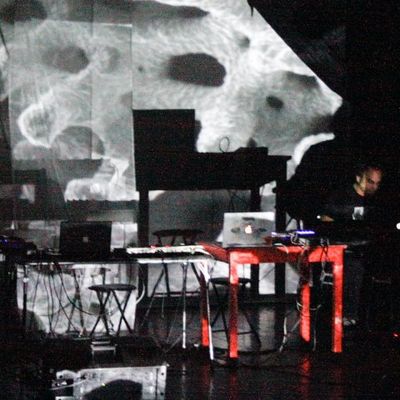 United States, Asheville
X A M B U C A is an ongoing multimedia collective with help from several other
trusted authorities; namely at different times and places: Chandra Shukla, RK Faulhaber, Jason Scott Furr, Lux Vibratus (Chrome), Dave Jones (Sturgeon Hoof), Alec Way, Jason Berry (Vaccuum Tree Head), Ron Anderson (PAK), Elisa Faires, Larry Thrasher (Psychic TV, Splinter Test, Thrasher Qawwal) Todd Mellors( Saifir), Sijal Nassrala (Slamming Door Orchestra, Dunums), M.S. Waldron (irr. app. ext. and Nurse With Wound), Hans-Joachim Roedelius, David Linton, along with the video and audio expertise of Jason Scott Furr and Megan McKissack. The crew has been seen if not heard sonically feeding the beast known as X A M B U C A.
X A M B U C A is not limited to any particular style or category of music and would like to establish that
it not be limited to the confines of musical categorization...experimental you say? Well we've experimented and know the possibility of most usable sonic results. So has the rest of mankind now that we together embark upon the footprints of human unoriginality.

As the name implies, X A M B U C A, is a non-sensical arrangement of letters spelling out what most often confuse to be the Italian liqueur made from elderberries known as 'sambuca'. In actually the name lacks any direct definition whatsoever, the similar spelling only a mere coincidence. Cause it's never what you think it will be, but it might and we'd like you to start thinking it's whatever you want it to be...even if it's horrible.
This being indicative of the chance operational, improvisational, free-for-all element of approaching art
with a naivete free from distinction, categorization, organization, limitation and imitation while also struggling with the confines of these simultaneously as we would be naive also to ignore that these phenomenon exist wherever humans are possible.