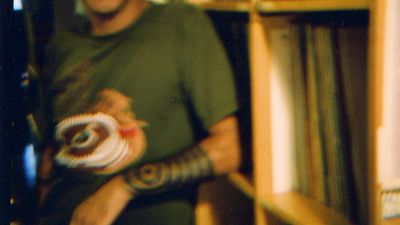 Known in Italy as "Mutoidi", their events have opened the way to warehouse parties (abandoned spaces squatted for the duration of the party) during the mid 80s to the acid house generation that grew up in London in those years. London’s community of musicians and dj/producers still remember those parties, where a mix of punk, cyborg, live bands and djs were melted in an atmosphere coming straight at you from a comic strip.

starting from 1993 Omnidrive and its sound system have become an active part of the group and the long series of show/parties brought on tour from 1994 to 1997.
In 1997 he travelled widely throughout Mexico and central America, where he met Jethro Dee, joining forces in a serie of parties still in the memory of the locals at Zicatela Beach (Puerto Escondido, Mex).


One of the first to organize and get to the dancefloor the Italian ravers parties in the beginning of the '90s, he has been, since their first openings, dj guest at venues like Link and Livello 57 and all the editions of the Street Rave Parade Antiproibizionista (Bologna, Italy), which reached a public of 100,000 followers during its 10 editions.

Since the end of 2000 he has joined its energies with 5 more djs, forming h2O DJ Crew, collective with colourful musical shadings.

In 2007, with Dj Gomes, he's been organizing Eclectronica, events with various live and guest djs, held at Laboratorio Autogestito Crash in Bologna (I).


Omnidrive’s sound has evolved from London’s acid house, moving towards German trance and English techno, typical of the mid '90s; from rave parties to clubs, the musical choice has refined with house french touch, percussive rhythms, deep sounds of Canadian and American west coast dub house. His record bag has become richer with the new electro/acid trends, big on the northeuropean dancefloors. All these infuences find space in Omnidrive sets, talented with great sensibility towards the feeling created with the public, important part of his performances.