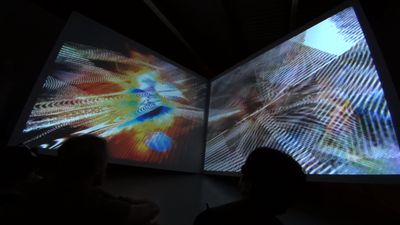 This first interation of the project was performed at Odetta Gallery in New York and was entitled ‘Project X’. The title of the piece was derived from the title of the sculpture, ‘X Never Marks the Spot’ by Thomas Lendvai that was the projection surface for the performance.

‘Project X’ was performed in the gallery as an improvised performance with live music and video. Slater provided the video content and performed music live with MIDI guitar and sequencing on a laptop and VJ Doctor Mojo mixed the video live and set up the video projection mapping on the sculpture.

Notes and chords on the guitar were assigned to video clips so that the video would react to the live performance. This reactive video system is the basis of this work in progress and is a further exploration in my interest in video as an instrument.

A second iteration of this piece was performed at Gallery Sensei in New York as a solo performance with a single projection.

I am proposing a version of this piece as ambient/reactive live, improvised A/V performance for the festival.

( ) is Jeremy D. Slater, a multi-disciplinary artist working in the areas of sound, video, computer art, performance, and installation. Jeremy was born in Reading, England and is a graduate of both SUNY College at Buffalo and School of Visual Arts with an MFA in Computer Art.. His sound work consists of field recordings as a base to create processed drones with guitar, objects, ambient noise, and environmental sound. Performances include live performed video that is ambient and reactive. Video work includes single and multiple channel videos for screening and installations with sound and ephemeral sculpture. He is a member of Plan 23, ROTC (Rubaiyats of the Cicadas), Frogwell, and tū. He is currently curator of a "sonic front" at Front Room Gallery, series exploring electroacoustic improvisation, electronic music, and sound art. He's curated numerous performance events and gallery shows in New York including “A Sound Show” at Front Room Gallery, the sound/video performance series “kere.u” and “FLOW”, “Sun Khronos” at Millennium Film Workshop, and “Video as an Instrument” at The Tank and Supreme Trading Gallery. Jeremy Slater was one of the 1999 recipients of the Computer Art Fellowship from New York Foundation of the Arts (NYFA) and has attended the Experimental Television Residency, was guest musician at Watermill Center and HERE with Cave/Leimay, and was artist in residence at Seoul Art Space_Geumcheon in Seoul, South Korea. He has exhibited and performed in the United States, Canada, England, Germany, France, Italy, South Korea, and Japan.