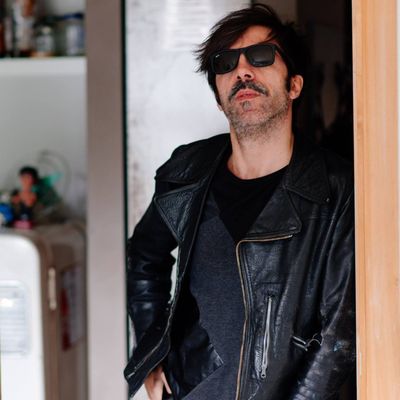 Italy, Rome
Architect, "hybrid" designer who is passionate about creativity and all kinds of experimental languages and "Underground" expression: counterculture, design and new media.

In 1997 he founded e'lab 000 reset project, an undergound event organization.
In 1999 he co-founded B_muvis videocrew, pioneers about vjing in Italy.
In 2001 gave his personal tribute to create FLxER vj mixer.
Vj since 1999, alongside with his crew and individually he performed with the best DJs on the world scene in the best parties and clubs in Italy.
In 2000 he was co-founder of Bluecheese Factory in Rome, a kind of permanent experimental laboratory for contemporary languages: installations, electronic music, veejaying, web-art, theater and performance, photography, graffiti writing.

In 2008 he founded Spaghetticreative, a network of designers, graphic designers, audiovisual artists, writers, dealing with creativity, art, design and communication.

Since 2014 his work focuses on the organization of the Live Cinema Festival of which he is the artistic director.

In the 2019 and 2020 New Year's Eve in Rome , he collaborates with the Palazzo delle Esposizioni to curate important artistic installations.

"Mine is the generation of the Commodore 64, was born with TV and grew up with bread and videogames...I take everything I have under my eyes, I break it, I reshuffle it and then I vomite all it over the dancing crowd."