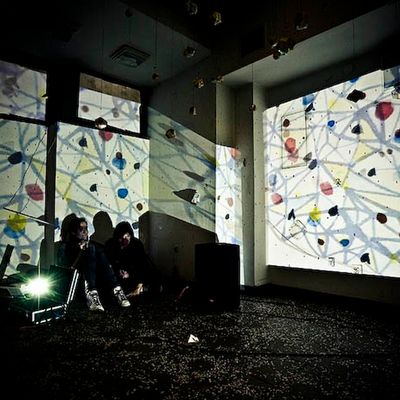 -Stendek (a.k.a Maciej Wojcieszkiewicz, audiovisual artist based in Gdańsk, Pl; with a MAdegree in fine arts at fine arts academy in gdańsk. when it comes to music he comes from ambient, minimal and IDM. his live performances are always combined with visuals made by him or another visual artist.) http://soundcloud.com/stendekaudio

-Hertzshmertz (a.k.a. Agata Królak, visual artist based in Gdańsk, Pl; with a MA degree in graphic design at fine arts academy in gdańsk. her visuals are a mix of short stop motion animations, in which naive forms and simple, intense color are the key. /dance, origami, confetti!/) http://bunuelspal.eu

together, in 2011 they've started developing an a/v project, under the same name:

YUME is an audiovisual project, created in Gdańsk, Poland by Stendek (Maciej Wojcieszkiewicz soundcloud.com/stendekaudio) and hertzshmertz (Agata Królak - bunuelpal.eu). Yume, means dreams; the goal of Yume is to create an independent space filled with image and sound, abstracted from surroundings - an a/v microclimat, music box filled with visuals.