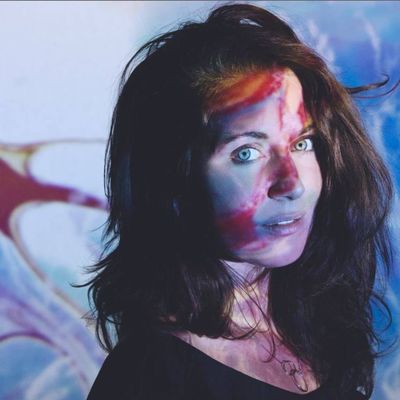 Frouke ten Velden, Media Artist and VJ-Sculptor based in Amsterdam. As VJ Frouke approaches her set (her visuals and devices) as a musician approaches his instrument. In her sculptural work, she explores the boundaries and meaning of sculpture and herein seeks the possibilities light and projection. Her work has been shown at various galleries and Art festivals like the Van Gogh Museum, Eye Film Institute, TodaysArt festival and the international Rio mapping festival.

She works as (live) scenographer and art director of theater, music and dance performances. From The National Ballet or an orchestra playing Shostakovich to an Eco-Political theaterplay in the empty shipyards of Amsterdam. Frouke has worked as (live) scenographer with several Dutch music legends like Henny Vrienten – Doe Maar, De Dijk, Van Dik Hout and is art director of the live shows for the psychedelic blues-funk band MY BABY.

Besides her active role as a maker and performer, she also teaches film and photography at The Rijksmuseum where she is part of the Rijksmuseum’s Media-Lab team and teaches Live Visual Performance and Videomapping at the Breitner Academy – Amsterdam school of Arts (AHK).

“As live visual performers, we bring our tools, which are basically just a set of rules, a composition or a method which enables us to work live. (…) I use VJ as an umbrella term for most of my work, it’s not necessarily referring to video, so even when I find myself welding sculptures. For me, it feels all the same: Creating content, content to work with, live.”

ANIMA – art installation (2014-2016)
Art director ANIMA, a series of works that explores how we relate to a digital entity. ANIMA questions concepts on interaction, reality and intelligence. ANIMA was created in colaboration with onformative studio for generative design.

BIG Words @ van Gogh museum- art installation (2015)
Van Gogh Museum, temporary installation, BIG Words. For a month the plant Big Words, the show and do. Visitors were invited to participate in the work of art that grew over the period of one month.