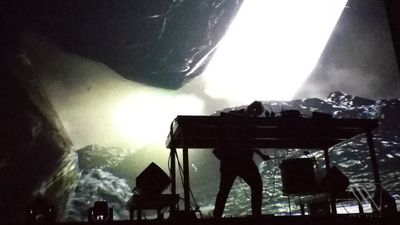 The Nent "NEITHER" [live AV]

Thursday, 12 March 2020 | 21:00 > 21:30 2020-03-12T21:00:00.000Z | Auditorium
Modern Bön proudly presents THE NENT [ facebook.com/thenent ], a Berlin based Ambient/Experimental producer and 3D artist, who focuses his performances on an immersive experience where a symbiotic relationship intercurrs between sonic and visual perceptions.


His productions are recognizable for the emotional progressions of old field recordings and samples elaborated in eruptive and heav(enl)y explosions. The cinematic sounds are accompanied by solemn and colossal 3D visuals that are always leaving the audience in a cathartic silence for the whole performance.

The work of Vince Gagliardi has been compared to Roly Porter, Ben Frost and The Haxan Cloak by the music social media. His first album was released in March 2019 “Vulner” (on Cyclic Law).


The Nent is available for dates for the entire 2020, presenting his new stunning AV LIVE SHOW “NEITHER” (Out in the first weeks of 2020 on Modern Bön https://modernbon.bandcamp.com )

A sinuous interplay between new brighter atmospheres , where surreal Icelandic landscapes are dancing slowly on echoed piano notes, and blurred memories are lurking,beating their drums from the distance.

sharing the stage with Caterina Barbieri, Varg, Ryoichi Kurokawa, and also Nastika (Pact Infernal), for whom he also curated the visuals..

Here an edit of the Lunchmeat show : https://www.youtube.com/watch?v=Z6pX_f7jFrE


His new work has been featured in various articles and reviews:


“...with Impressive performances by Aid Kid and The Nent.” [ FACT MAGAZINE ]

“...an intense bang with The Nent premiering “Neither”, an all new AV live which featured his fresh delivery of earth shaking electronics and immense vocals coupled with an amazing visual display of classic and modern…” [ THE BRVTALIST ]

Interview about “Neither” AV premiere, for The Brvtalist