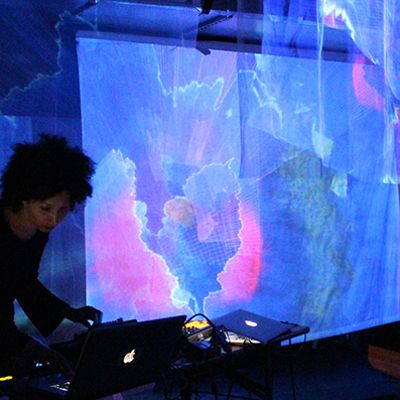 L’Aubaine started performing live visuals in 2005 while studying a master in Digital Arts in Barcelona.

She crafted her unique style over the years, mixing analogue and digital techniques in an unusual and elegant way. Her work is organic, graphical and painterly and most of the time abstract. It has a handmade feel, imperfect, bold and very colourful. She feels like a painter on a canvas, while creating live compositions for her VJ sets. She loves projecting out of the rectangular screen, with projection mapping and live mapping on buildings, fulldome projections and also by breaking the rectangle shape by mapping compositions on the screen.
Her clips are mostly hand-drawn animations and simple shapes. It's mainly 2D and often uses in her set an analogue video synth to create texture and lines.
L’Aubaine also likes to explore narrative forms in real time and in Live Cinema she expresses psycho/socio/politics/ concerns.

Since 2015, she is part of VJ London, organising the regular Meet-up & Showcase.