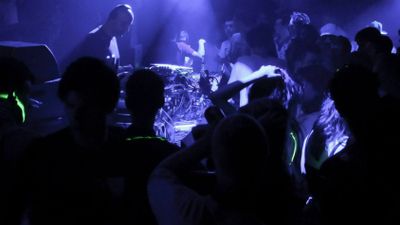 Friday, 13 May 2016 | 02:30 > 03:30 2016-05-14T02:30:00.000Z | CONCERTZAAL
DEXON has established him self as a talented Dj and Producer with his well known blend of Tech-House and Techno. Having held residencies in The Netherlands (Amsterdam), he has toured the world playing in most of the big clubs in the USA, Sweden, Austria, Uk, Serbia, Hungary, Bulgaria, Germany, Croatia, Romania, Slovenia, Israel, Czech Republic, Turkey, Malta, Belgium and Spain ( Barcelona ). His productions have been played by names like Carl Cox, Misstress Barbara, Jack De Marceille, Paco Osuna, Marco Carola, Umek, Ben Sims, Gabriel Ananda, just to mention few. You can find his productions on CD compilations like “SOLID SOUNDS”, “CLUB SYSTEM” and the famous “U60311 Compilation techno division Vol. 5″ compiled by Gayle San. Throughout his career he has performed with artists like Advent, Jeff Mills, Ken Ishii, Danny Howells, Dani Sbert, Rino Cerrone, Luigi Madonna, Audiomatiques, Tom Novy, Jamie Anderson, Danilo Vigorito, Redhead, Deetron, Marco Carola, Sam Paganini and many more. Dexon is the owner of InDeep’n’Dance Record Store in the Center of Amsterdam and has his own label. He has released music on many labels both on vinyl and digital with artists such as Marko Nastic, Tom Hades, Dolby D, Minitech Project, Michael Burkat, Dani Sbert, Lolla Tek, A++, Mark MyWords and has done remixes like “El Ritmo Del Verdad” from Lego, on the exclusive Belgian label “541”. This remix went on charts around the world and was a great success. Today you can find Dexon in his InDeep’n’Dance Record Studio in Amsterdam producing music and organizing famous Techno Tuesday and Kraft events.