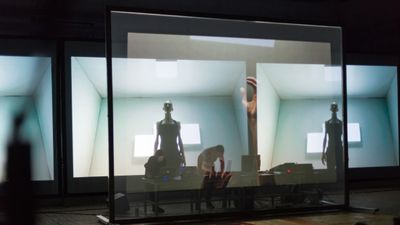 The Dotokime project was born from the passion of two artists: Emilia Gumańska, known under the VJ Emiko alias, and Artur Śleziak, producing electronic music as Dot Dot. That passion which has gathered them together is for music, video, experimental art, and technology.

For her video installations, Emiko works with a human body, shadows, and emotions. The music of Dot Dot is the art of creating tense sound; it's an ongoing experimentation with colors and space. What one can equally feel in both artists' work is the depth, beauty, and multidimensional universe. And their debut joint project, called "Light Particles", truly unites all these characteristics. It is the dance of a man, light, and sound. And the presentation of everything that's important to a human being.

It took over a year to film all of the scenes, required for an hour-long story – combined with music – which unfolds, hypnotizes and makes time stop. The project was premiered in March 2015 in the Centre of Audiovisual Technologies in Wroclaw. The video displayed on four screens, and the surround sound created a unique atmosphere, awakening deep emotions from the audience. The show has received a very high acclaim, which led to the two artists deciding to further develop their experiment and present the project to a wider audience.

more info about us > https://www.facebook.com/dotokime/