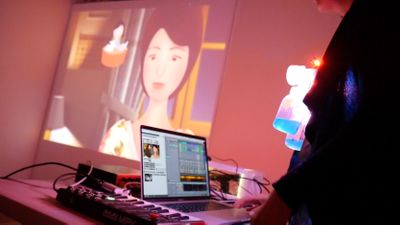 Thursday, 02 May 2019 | 18:40 > 19:05 2019-05-02T18:40:00.000Z | Galleria
Bad Mother / Good Mother is an audiovisual performance involving a projection, a modified electronic breast pump as a sound generator, and a sound-reactive LED pumping costume. The project has four songs that critically explore technologies directed specifically at women like breast pumps and fertility extending treatments such as egg-freezing (social freezing). Depending on the song, the breast pump is either a solo instrument or part of an arrangement. The idea is to use workplace lactation as a departure point to uncover a web of societal politics and pre-conceived perceptions (pun intended) of ideal and non-ideal motherhood.

The Songs (audio and visual)
The audiovisual performance has four “songs” consisting of sound and connected visuals that are projected during the performance. In the first and last song, the breast pump is treated as the solo instrument, in the two middle songs, the breast pump sound is part of an arrangement.
The first song uses the breast pump sound as a solo instrument. Thematically, the song is about different aspects of pumping breastmilk at work. It has two basic sounds: The sound of the milk letdown which is slower and the sound of the pumping which is faster. In the performance, I am switching between the two modes, playing them at different intensities. The visuals are still images of different breast pumping situations and the stresses related to extracting milk in a work environment.
The second song is about maternity leave. In the US, parental leave is not mandated by law. The visuals show (US) politicans displaying fake reverence towards women. The breast pump is playing in the background, defamiliarized by vocoding.
The third song is about freezing eggs to delay motherhood. Egg freezing is an elective medical technology that is sold to women as empowering because it allows women to delay motherhood by freezing their eggs. Because the motivations are social and not primarily medical, the procedure is also called “social freezing”. It is big business especially since large tech companies like Facebook have announced that they will pay for employees’ eggs to be frozen. Facebook was criticized for using this “benefit” to pressure women to delay motherhood. As if successful employeehood was not compatible with motherhood. The song uses the breast pump as the heavily vocoded lead vocals in a cover of Daft Punk’s “Get Lucky”.
The fourth song is improvisation, using filters to distort different aspects of the sound signal. The visuals are of a woman pumping. Individual movements are repeated rhythmically along with the sound. It signifies the repetitiveness of the pumping routine.