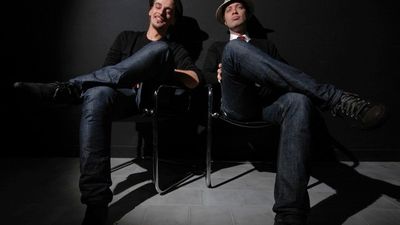 Friday, 01 June 2012 | 00:50 > 02:20 2012-06-02T00:50:00.000Z | Room 7
In the world, Andrea Giotti and Edoardo Mazzili; at the console, two great lovers of the funky side of techno; travelling the world, two people hopelessly in love with club culture. ‘Anderedo’ has been on the electronic scene and organization of events for over 10 years. It all started as a bit of fun, but with their already vast experience behind the decks it soon transformed into an adventure that took them performing in some of the best clubs in Italy and abroad. Having made roots and importance in the Bolognese territory, through constant contribution and vital Playhouse events, which celebrates ten-years this year, and having a residence at Link, a true icon among European clubs, Anderedo has also gone up and down all the peninsula, transmitting the same music passion to the dancefloors in the most important Italian clubs. But the tight boundaries of the nation haven’t held them down. They are regular guests at Watergate and at Bar25 in Berlin, and even at venues in Russia, Latvia and Brasil; with having such rich and valuable experience Andrea, Edoardo and the Cultural Association which they themselves founded ‘ Shape, ’ are able to bring to life one of the most interesting emerging festivals in Europe: Robot Festival – four days packed with workshops, conferences, artistic performances, live and Dj sets from all over the world, located in top venues in the city of Bologna.

The next step for Anderedo is to dedicate themselves to the international electronic circuit and also as producers: having established a sound so unique and entertaining, made up of warm deep house and mixed funky and a powerful minimal techno , they have created fertile soil, attracting local labels and Anderedo are more than ready. The first Anderedo production will be out in march 2011 under L.E.D.
As a result of following all the various music flows over the years and Edoardo and Andrea’s so very different backgrounds, the two make up what Anderedo represent today, having an open and broad approach to music and continuing to storm different and unusual territory, the font of their dynamism and movement for their music, the dancefloors bear witness to the unquestionable power of their music, time and time again. Feel the vibe!