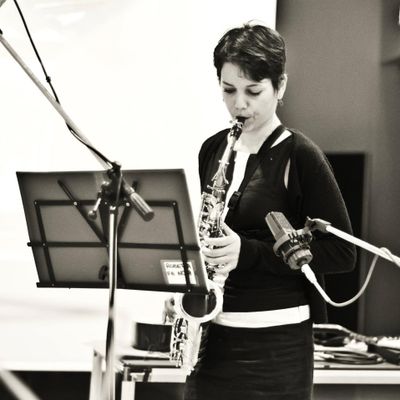 From 2005 she devoted herself entirely to the study of music, attending at Conservatory A. Corelli of Messina the three-year Bachelor in saxophone under the guidance of M. Gianfranco Brundo. She continued her studies at Conservatorio Santa Cecilia in Rome, in the class of M. Enzo Filippetti, graduating in march 2012. She was in Berlin to study with M.Detlef Bensmann for an Erasmus program.
She is now specializing in Alessandria in Didactic and Pedagogy of Music.

She attended Saxophone Master Classes held by M. G. Brundo, M. C. Schaetzle, M.D. Bensmann, M.C. Delangle, M.Lars Mlekusch, M. Maurer, M.Ciaccio, M.Mollica, M.Alba. During summer 2011 she attend the International Master Class “Jazzpuzzle” in Mouscron, Belgium and one about Alexander Method in 2007.
She has worked with the Youth’s Orchestras, quartets and duos through Sicily and Rome, performing with them classical music, and various arrangements of contemporary and old jazz repertoires. She also plays as soloist, with contemporary and original music, perfoming first work of the composer Simone Cardini.
She has been tenorist from 2009 to 2013 in the orchestra “41 Parallelo” of Rome. She has worked with the S&P Ensemble of the Conservatory Santa Cecilia in Rome, during the International Saxophone Festival in March\April 2011.
In Berlin, she played in Humboldt University with a chamber duo. Actually, she plays in ParadosSax, duo of classic and contemporary music, with the pianist Cristiana Mastrantonio.s also in the 8var, live elettronics project, with Ali Ostovar.
Ha eseguito prime di brani del compositore Simone Cardini, in particolare Idiosincrasie per sax alto solo e Wahn per sax alto e piano, eseguito in duo come ParadosSax.
She stated working as teacher in 2008, with children and young peoples in school, and she also taught as private teacher.
She’s also music therapist, graduated in in Rome at the Triennial School of Music Therapy hold by Cooperativa Oltre. The methodology adopted by the School for music therapy training is that of Prof. Dr. Roland Benenzon. She works now as music therapist, mostly in project with children.