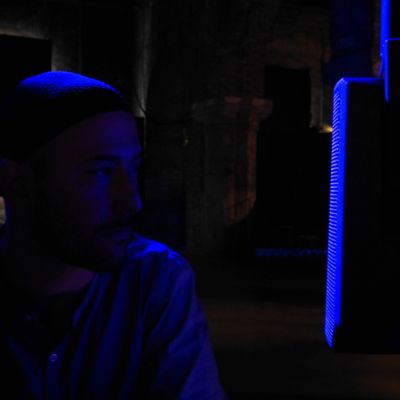 Italy, Roma
CESARE SALDICCO (b. 1976) starts to playing the piano during his childhood and receives the superior diploma at Perugia’s Conservatorio in 1999. He achieves the Electronic Music diploma with Luigi Ceccarelli in 2004. Under the expertise of Fabio Cifariello Ciardi, he graduates in Composition, Counterpoint and Fugue in 2007. For his artistic development have been very important his encounters with Anders Hultqvist and Ole Lützow-Holm during the Erasmus scholarship in Sweden. Soon afterwards he attends lessons and master classes with Philippe Hurel, Unsuk Chin, Oscar Strasnoy, Helmut Lachenmann, Gavin Bryars, Salvatore Sciarrino and Ivan Fedele, with whom he obtains the PhD in Composition at the Accademia Nazionale di Santa Cecilia in Rome.
Winner of several scholarships (Erasmus, Acanthes, EdisonStudio etc.), he has been awarded in many composition competitions.
In 2006 Centro Tempo Reale, founded by Luciano Berio, selects him to form the Soundex project in Florence. In this project he realizes the sound design for the exhibition “Radio FM 1976-2006” in the following cities Bologna, Modena, Padova, Bari, Livorno, Milano, Udine and Roma.
In 2007 he has been selected from CECh – Comunidad Electroacùstica de Chile during the VII International Festival of Electroacoustic Music.
In 2009, the multimedia work "Cut up & Grain, Chapter 1: Life" conceived and created together with Antonino Chiaramonte, won a mention in the "36th International competition of Electroacoustic Music and Sonic Art / Bourges 2009". EmuFest in Rome, selects his electroacoustic works in 2008, in 2010 and 2011. CEMAT Federation include his work "Naissances Latentes" scored for amplified cello, prerecorded sounds and live electronics in a CD series named "Punti di Ascolto", while in 2012 the work "Digressione Ipertestuali N.10" is selected by Musica Viva Portugal for the installation “Sound Walk 2012” at the Goethe Institut in Lisbon. In the same year “La Biennale di Venezia” invited him to produce a new sound art installation - “Still Life”- staged during the 56th edition of the festival.
His music is edited and published by ArsPublica, Philology and Sconfinarte.
His works have been performed in Belgium, Bulgaria, Chile, England, Finland, France, Germany, Greece, Italy, Portugal, Sweden, Switzerland, U.S.A. and broadcasted by Italian National RadioRAI.
In the field of musicology he had two series of lectures by titles "Contaminazioni sonore" and "Music and Architecture”, while in the field of teaching he developed an ear training software with Max/MSP.
He is the founder, headmaster and artistic director of the Cultural Association G.E.R.M.I. (European Independent Music Research) and promoter of the homonym festival and composition competition.


HENRY COOK is a multi-reed player, whose instruments include alto and baritone saxophones, flute, alto and bass flutes, and a variety of folk woodwinds. His passion for many styles of music, including blues, funk, latin as well as African and Arabic musical forms have given him a very eclectic and innovative approach to playing.
His musical associations include John Medeski, John Tchicai, "Ku-umba" Frank Lacy, Cecil Brooks, Howard Johnson, Steve Neil, Joe Bonner, Donald Smith and Mark Johnson among others, each of whom has played on some of jazz' most important recordings.
After studying with Joe Viola at the Berklee college of music in the early eighties, he began his career in Boston playing with the Billy Skinner Double Jazz Quartet. Over the next few years, they traveled throughout the Northeast, as well as England and Northern Ireland.
He eventually formed his own band, which performed across the US, and in 1996 did a tour in Mexico. In addition to his own band, Cook has had a long musical partnerships with the Either/Orchestra, Salim Washington’s Roxbury Blues Aesthetic and Jorge Arce’s Humano.
In addition to performing, Henry has dedicated to Vjing live set with aka Vj Loco.