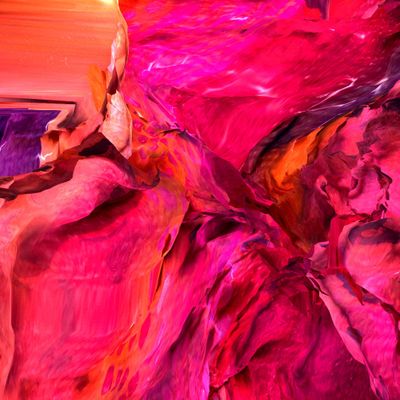 Estonia, Tallinn
Estonian artists Alyona Movko (visuals) and Argo Vals (live-electronics) have been cooperating during one and a half years. Together they create a performance which consists of glitchy visuals, a modern approach to an electric guitar and electronic sounds.

Alyona Movko (b 1984) is an Estonian audiovisual artist, working in the fields of audiovisual art, new media, live visuals, concerts, festivals, live events; architectural, botanical and video mapping on moving objects. As a video artist sheâ€™s collaborating with alternative and classical directors, orchestral conductors and theatres. Alyona has been playing vj sets on big Estonian, Danish, Finnish and Lithuanian stages, in a variety of styles from symphonic projects to underground electronic music festivals. With a background of a classically trained composer, Alyona Movko is experimenting with visuals and sound, passionately searching for new forms and structures. As a child, she used to transpose all sounds into colours and shapes and learned how to understand a surrounding world in this way. This is why synesthesia is the main base of her creative process and an inexhaustible field of inspiration. She has graduated from Tallinn Technical University and is now studying Audiovisual composition in Estonian Academy of Music and Theatre and is tutoring projection mapping and live visuals in the UT Viljandi Culture Academy.

"Vals has spoken of prog's baroque beauty, whilst recognizing the wisdom of staying within minimal forms." (Far From Moscow)

Words and feelings as „freedom“, „playful“, „dreamy“, „clarity“, but also „anxiety“ can give you some hints to imagine music that he creates.

Argo has been making music for almost all his life, but gained an interest in experimenting and recording music mainly DIY in 2006.
He started composing and performing with live-electronics in 2008. Nowadays his setup consists of electric guitar, drum machines, looper and effect pedals. The architecture of sounds resembles at times idm, ambient, math rock and nordic jazz.

Third album will be released in fall 2018. For now there are two singles "To a Tireless Daydreamer", released in June 2017.

Argo has made three tours with his live-electronics performance in Europe and Russia since 2014 in average of 10 concerts.