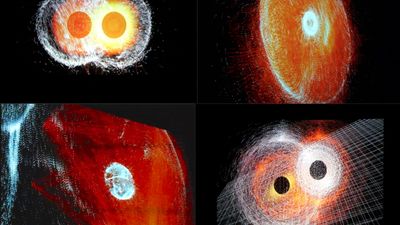 Friday, 08 June 2018 | 18:00 > 18:30 2018-06-08T18:00:00.000Z | Studio 2
“Matters-ton” from Hyper Serial Music for Sound/Visual Performance
Sound Visual performance Matters-ton is a 2nd chapter of his Hyper Serial Music peroject/series aiming to expand, in new contemporary sense, classical means related to the history of Serial Music. In this work, Tatsuru developed and evolved into more complex and higher quality result, unfolding the relation between Sound and Matters on the three Dimensions of Space. By means of algorithmic simulation, principles designing the audiovisual substance are correlated directly on showing the physical side of Universe through human perception.
https://vimeo.com/240849839


Performance:30-40 min.
Equipment:1 projector,white screen(or wall),2 channel PA with subwoofer
Tatsuru Arai (1981) http://www.tatsuruarai.com/ video https://vimeo.com/178787020
 
2003-2009 Bachelor and Diplom studies in composition with Akira Nishimura,Toshio Hosokawa and Sunao Isaji at
Tokyo college of Music.2007 in composition-class with Bernhard Lang at Implus in Graz.2009-2013 MA-studies
Compostion, Computer-programming and Multimedia-art with Wolfgang Heiniger at the Academy of Music "hanns
Eisler" Berlin. His works are performed in Over 40 cities in Europa, and Argentina, Mexico,Colombia,Tunisia,Japan
etc. Opera „Vitruvian“ was performed Berlin und London that innovativ contemporary Opera,that to integrate from
classical Music to new Technology.His main artistic Thema is to integrate from classical compositions to new
technology, as „TRANS-AGES MUSIC“,and to present the fundamental physical nature of the universe in the form of
perceptional experiences, that could say aesthetics of “geometric structure”. The human perception of sound, a
physical phenomenon, influences human beings and the “geometric structure” is a fundamental pillar that allows us
to understand the true nature of the universe. Creating a way to experience even a part of the nature of the universe
through sound. From 2016 he is composing Hyper Serial Music that will add innovation to the principle of Serialism
three-point: "structural", "complex" and "noisy". Hyper-Serial-Music is the algorithm music generated by state-of-the-
art technology such as Artificial Intelligence than by native human intelligence only. He is performing this work in
over 30 cities.