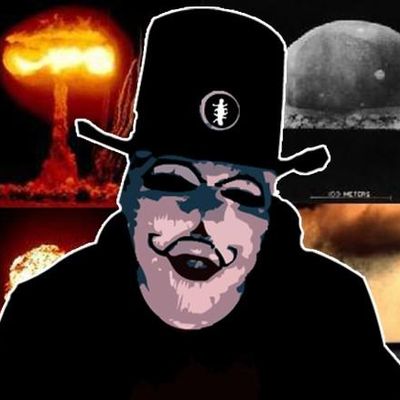 Their interventions seek to generate a metaphysical experience that activates the primitive instincts and emotions, expanded performance and sound mutation.

BIO:
In 1996 forms the ENCEFALISIS project aimed at producing collective acts of performance and sound pieces that found its final form in several CDs, among which are (Homónimo, Actos Pagans, 999, 13, ERROR and TRAGA, TRAGA, TRAGA¡¡¡ ) under the name of Dr Kontra, recorded an album with the French label NKS International, produced in Barcelona in Irreverent studies, together with Akani. Throughout his career he has collaborated with various artists both sound and performance and has performed live solo and collective projects in various forums in Mexico and Europe.

He participated as a composer, creating the music for the film “Sin Destino" and worked in Barcelona for the realization of "Ego pervertum" audio-book. In Berlin he formed the collective performance called INTENTO, with artists from around the world that aimed to give a socio-political vision from the perspective proposed by the group of collaborators, addressing issues concerning the tradition, technology, nation and globalization. This project was exhibited at various venues and festivals in Germany and Spain, as well as the short film CONTRY LIFE by Pan Movies Pirates.

Co-founder of BINARIA collective platform which prompted several local projects of experimental music, industrial, noise, performance and video. Precursor in the field of digital art, animation, net label , web radio. Where he has made, festivals, physical production of KCTS and records for over 20 years.

His practice has sought to promote the art of rupture; the ideological shift that begins to occur in our society, directing it to an intelligent rebellion; His faced problems is based on the invisible self-censorship which imposes the average citizen to passively swallow the garbage that abounds on television and traditional media. A mental anorexia direct provocation that automatic and fainthearted social mass will not ask, do not understand, do not look.