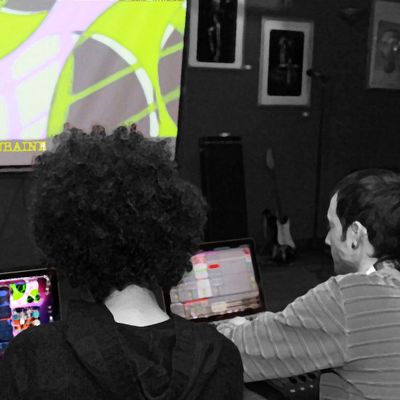 Diarmo
Produces a range of electronica, DJ/Live sets blend a mix of deep minimal techno, house, bass. You can catch his DJ sets on his fortnightly radio show "Vibrant Sound" on Shoreditch Radio or at his monthly residence at “Basilar Presents...”, London.
Diarmo has released a number of EP's, while also having tracks appear on compilations worldwide.

L'Aubaine
Her visuals are a constant evolving composition between figurative and abstract shapes, mixing videos, photography, typography, animations and ink drawings, using self-produced material. She looks for the imperfection of the human hand by using analogue techniques such as painting, drawing and hand-drawn animation.
Since 2010, she collaborates with Diarmo on a audiovisual live performance and also produces the visual and graphic design for Basilar Records.
L'Aubaine has collaborated with several artists (Fernando Lagreca, Manintheattic, E MC²) for live audio/visual performances, while also presenting her work in festivals and events around Europe.