LPM 2015 Rome takes place in several locations, to strengthen the connection with the city after the foreign editions of the past two years.

After the successful edition of 2011, LPM is back again at Nuovo Cinema Aquila, a multi-purpose cultural space dedicated to cinema and performing arts, run by a social cooperative and returned to the city after the recent renovation sponsored by the Municipality.
Thanks to the collaboration with the students of Sapienza University collectives, some of the workshops and panels are featured in dedicated areas of the University as the big final party which will takes place during La Notte Bianca della Sapienza, an open air festival fully self­managed and self­financed by the students collectives of all the faculties which takes place in the streets and squares of the campus. After seven editions the festival has become a very important event which involves more than 15.000 people.

In addition to the Meeting, LPM present the second Artistic Residency at Palazzo Chigi in the City of Formello (RM), produced with the assistance of the Province of Rome, the cofunding of Regione Lazio Assessorato Cultura e Politiche giovanili and the collaboration of the City of Formello. 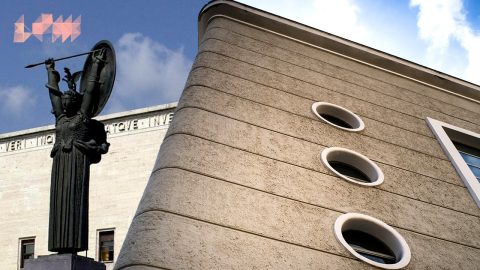 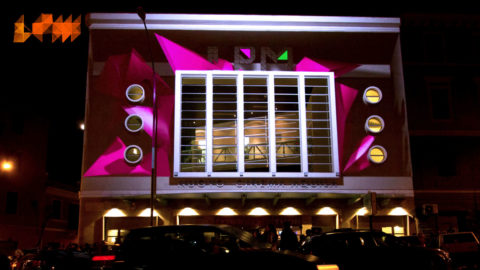 Venue consists of three floors, connected by a sight staircase, and includes three cinema halls set up with the highest technological standards, to provide the public with a comfortable and optimal fruition.
The internal volume is enhanced by a foyer with a balcony in steel and glass, that overlooks the ground floor atrium, accessible from the main entrance in Via L’Aquila.
On the ground floor there is also a lift, handicap facilities, the ticket office, a bar and the largest cinema hall with a capacity of about 180 people.
Other two cinema halls are located on the second floor, providing a overall capacity of 150 seats.

INTERNAL // FIRST FLOOR – ROOM 1 (capacity 180)
The parterre with 180 seats, face directly the stage below the maxi screen normally used for film screenings.
During LPM, the room will be set up with six screens, two on the sides of the maxi screen, and another two for each of the side walls of the room.
The room is equipped with a digital stereoscopic projection system with 3D projector CHRISTIE CP 2000 M, 13000 lumen, server QuVIS Cinema Player 2K/3D and decoding and rendering system 3D X-PAND with rechargeable active glasses.
The audio is supported by the server via a digital output, 6 analog audio converters connected to the DOLBY CP650 processor.
Speakers are all JBL Cinema Series.

INTERNAL // MIDDLE FLOOR – FOYER
The foyer of the Nuovo Cinema Aquila is an open space illuminated by the large windows on Via L’Aquila.
Located on the mezzanine, is a crossing place for access to rooms on the second floor, but also a neutral space, an area in which the viewer is not related to the concept of polarized vision, typical of movie theater with fixed seating.
For this reason it is especially suited to the realization of speech, panel discussions, showcases, where the freedom of living the space and the interaction with the public are essential.
The foyer has a technological equipment of three plasma screens, permanently set up on the front wall of the stairway access.

INTERNAL / / SECOND FLOOR – ROOM 2 & ROOM 3 (capacity 73 + 77)
Rooms two and three are very similar, they only differ in a small amount of seats.
Both halls will be set up with two screens on the side of the screen normally used for film screenings.
The room two is equipped with a DIGITAL PROJECTION Projector, 7000 lumens, 1280x720p, 3 chip DLP.
The room three instead, with a NEC NP 4001 Projector, 4500 lumen, 1280x768p, 1 chip DLP.
The audio is supported by the server via a digital output, 6 analog audio converters connected to the DOLBY CP650 processor.
The speakers are all JBL Cinema Series. 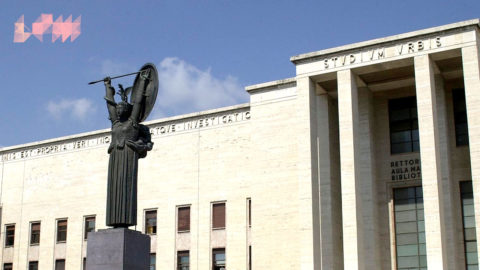 Workshops and panels take place in Classroom 6, Faculty of Arts and in Teacher Classroom, Faculty of Political Science.

After about 18 years of renovation, Palazzo Chigi was reopened to the public in 2011, as new cultural center of the city.
Inside it we find also the Agro Veientano Museum and the Municipal Multimedia Library.
The building appears to be the result of a series of stages of construction from the twelfth century to the present day.
The original nucleus, but also the more modern, appears for sure the tower.  Here are still preserved frescos of the end of ‘300.