The sixteenth edition of LPM Live Performers Meeting begins on May 18th, 2015 in Formello, with an Artistic Residency aimed to investigate the use of LED technology and low impact environmental and to draw and enhance the urban design in an artistic way.

During the residency, the engaged makers will analyze the economic and creative potential of LED in public lighting, in order to reduce power consumption and propose new ways to enhance the artistic and architectural impact of the historical center of Formello by using lights. More specifically, the research will focus on two issues: to produce an analysis of the current lighting conditions and related energy consumption in the historical center of Formello, compared with public lighting systems built with low energy LED technology and to experience the creation of a luminaria made of addressable LED, on which is be possible to project images, texts and videos, also controlled by the public.

Furthermore, among the research taking place in the Residency, there is also space for economic and intelligent lights that change color and intensity by reacting to input from “Human Ecosystem“, the real-time system created by Art Is An Open Source which collects and decodes streams of Open Data from the most popular social networks and processes in this way a “relational ecosystem” of the examined landscape.

At the end of the Residency, in addition to the moments of comparison and research, on Sunday, May 24th from 21:00 will be presented two A/V Performances in the Oratorio della Natività and a Live Video Mapping on the facade of the Oratorio della Natività in Piazza San Lorenzo, presented by the students of the Mapping Course by Studio Aira held in January 2015 at Rufa -­ Rome University of Fine Arts, whose aim will be to animate and to enhance the historic center of Formello. 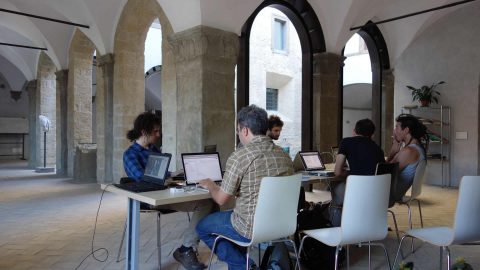