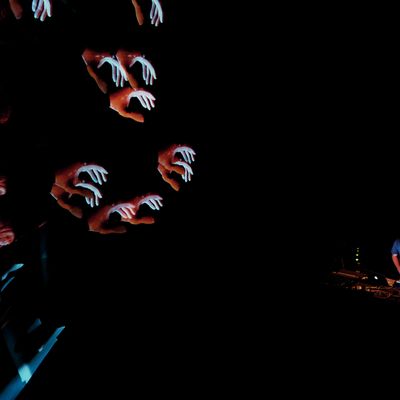 Brazil, Belo Horizonte
HOL, a project created in the beginning of 2008 by the transmedia artist Henrique Roscoe (aka 1mpar), intends to mix contemporary art, live audiovisual performances, digital art and the construction of custom-made interfaces and instruments.

The project plays out in the form of live audiovisual performances. Initially, a concept is created and, out of it, all the sound and image elements are developed in order to show emotions and sensations about the chosen theme. This narrative happens in a different way from traditional cinema and video, by the fact that it is performed live, taking a new form in each presentation, besides using abstract shapes to create metaphors of the real world. These analogies are made using the fundamental elements of the image that, through its colors, shapes and movements suggest sensations that will give the spectator ways to understand the poetics of each composition. The use of these elements is based on the studies of the Russian artists Malevich and Kandinsky. Both believed in the power of fundamental elements of image in the construction of personal narratives. Malevich, with his Suprematism, emphasized the intrinsic power of shapes and Kandinsky sought, through his work, extend painting through the suggestion of movement and the use of musical elements in his works (exemplified in titles borrowed from musical terms as Fugue, Improvisation, etc.).

HOL is a high technology project, and at the same time, it uses traditional elements of modern and contemporary art. It has its influence from an art field called visual music where sound and image elements, synchronized, create a seamless narrative in which musical elements such as rhythm, harmony, etc, are translated into the visual field. The project is influenced by pioneering artists in this area like Oskar Fischinger, Norman McLaren and, more recently, Alva Noto, Ryoji Ikeda, among others. However, HOL adds to the purely aesthetic focus – common to this type of work – the conceptual question, inserting reflective and critical elements about each theme.

Another important feature of the project is the creation of all programming of each performance from modular and generative software as vvvv and max / msp, allowing complete customization of what will be played live, both in sound and image. It would be something like creating a new software for each part of each presentation. Moreover, the random issue, widely used in the musical works by John Cage for example, plays an important role in determining paths that are not fully controlled by the artist. This procedure allows an expansion to infinity of possibilities to play each performance. Thus, each piece is unique and happens differently every presentation, though it always stays loyal to its theme.

Taking the concept of personalization to a higher level, the project goes further by also creating its own instruments, some of them allowing a complete separation from the computer and enabling the implementation of an audiovisual live performance using fully autonomous instruments created and programmed by the artist.